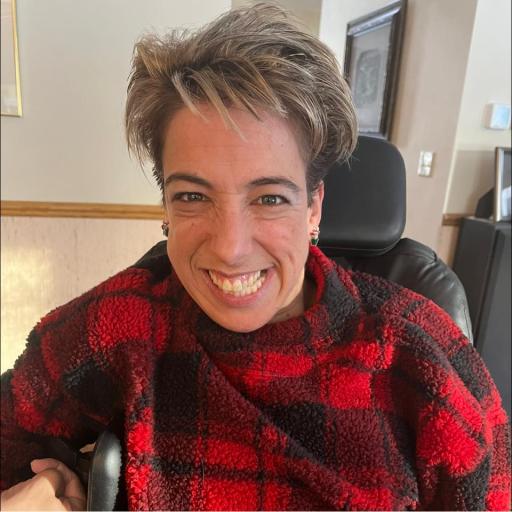 
Do you get nervous speaking in front of a crowd? Have you ever done something courageous like skydiving? Being courageous and taking risks is something we all do. Granted, being “risky” means something different everyone. Some people are riskier than others. Some people enjoy trying a challenge, while others prefer to stay on the safe side. Obviously, there are thousands of different risks we take every day that we don’t even think twice about. Crossing the street. Riding the bus. Getting out of bed. The list is truly endless. Taking risks is part of life, and can often lead to opportunities the person never dreamed possible. There is also forced risk meaning people have no other option than to try the task at-hand. People with disabilities are no different. We take risks just like everyone else. In fact, we likely take more risks than the average person.

“I couldn’t do what you do,” people often say when they meet my parents and I. While it’s a nice compliant, it likely isn’t true. Yes, admittedly, thanks to the support I receive from friends and family, I’ve turned into a pretty determined person, but, what many people don’t understand, is that I have no choice but to be. I literally depend on the assistance of other people to live. That alone is a huge forced risk that I have no choice in. Regardless of my living situation, being dependent on others is a risk in and of itself.

The biggest and most important risk I’ve ever taken was 19 years ago when I decided to go to UW-Whitewater. Because all of my friends were going away to college, I didn’t even realize how big of a deal it was. To me, it was just the next thing to in life. I don’t even think I thought about it as a risk. Even though, I spent the summer before typing up my care instructions for caregivers I had never even met, I never thought twice about being on my own down there was a risk. It was just the way it was. Sure, when it came time for my mom and sister to leave, I felt emotional and a little scared, but I thought that was pretty normal of an 18-year-old college freshman. My first night care was with a really sweet college student who could tell I was pretty nervous (I’m Facebook friends with her now, and, sometimes I message her and just say thank you for putting me at ease that night). The next morning is when reality hit and I realized “ohhh, ok, maybe this is a bigger deal than I thought.”  The aide who was supposed to get me up was over an hour late. Mind you, this is the very first morning I had woken up completely alone. We didn’t even think about having a phone by my bed. I had no idea what to do. I ended up rolling off my bed onto the floor, rolling over to my computer desk where my phone was, pulled the phone cord down, the receiver clunked me on the head, and I was trying to call my parents to see what to do when the aide walked in. Yeah, yikes! It was quite a reality check to say the least. I always tell people that I have no idea what convinced me to stay after that! It wasn’t until after I graduated from college that I began to realize what a giant leap of faith it was to move two hours away from home having never really had other people assist me with all of my needs. By taking that risk and succeeding, I proved to everyone, including myself, that I could live independently if given the right supports. The decision to give it a try at Whitewater has shaped my entire life!

Now, 13 years after graduating college, I find myself taking more risks than I ever have. Hiring my own caregivers is a huge risk. I don’t have backup. If someone doesn’t show up, my parents have to come. It’s a risk for me and a sacrifice for them. We have to trust that these people will show up. Yes, there have been several times in the last six years that people didn’t show up for a shift and we never hear from them again. I also have to risk having people physically take care of me. Unfortunately, the system is so messed up that I can’t train people properly. Technically, in the IRIS program, you’re not supposed to be able to pay people to train (again I think the assumption is that most IRIS participants use family and friends); however, we worked it out so that I am able to compensate people for one shift of training (by using some of my Supportive Home Care hours). This may sound like plenty, but it’s really not. I make do with what I have and have the person jump right in and do the actual care. The other worker is there to guide them. The new person often feels stressed and under pressure, but it’s the only way to do it. Having one training shift, the person is expected to be able to do it alone (this causes a lot of people to quit, but that’s beside the point of this entry). The first shift the person works alone is a huge risk for me. I don’t really know if they can do it alone and I don’t know what they would do if something happened. I have to risk putting my life in the person’s hands.

Being nonverbal adds another layer of risk to almost everything I do. Yes, I use the app on my phone to communicate, but there are many times that I can’t access my phone. When I use the restroom, shower, or transfer anywhere, I can’t use my phone. This probably doesn’t sound like a big deal to most people, but those are the crucial times when the caregivers usually get flustered and need guidance. Unfortunately, as you can imagine, this can be very frustrating for caregiver and I. In fact, several years ago, on a caregiver’s first shift alone, a transfer didn’t go right and I ended up on the bathroom floor. The caregiver flipped out, called my dad (who lives 45 minutes away), and ran out the door crying leaving me on the bathroom floor. Thankfully, she called my dad and we’ve since changed the way we do things, but it just shows the risk I have having to trust other people to assist me.

Living alone is another risk I choose to take. Countless things could happen that could literally leave me stranded for days, but it’s a risk I’m willing to take. Some people with disabilities aren’t comfortable living alone and I totally understand that. Another risk I choose to take is being vulnerable and putting my story out there. Some people aren’t comfortable with sharing so much of their personal life with the world, and that’s perfectly understandable. No doubt it’s risky putting your life out there, but, personally, I’ve come to believe that one of my main purposes in life is to show others what people can do despite their limitations.

All that said, I don’t consider myself a risk taker whatsoever—in fact, far from it. In my family, I’m known as the person who needs a plan and hates when anything changes. I’m not one to jump on anything spontaneous. The major risks I’ve taken in life have been required in order to live the life I desire. Sometimes, risks don’t work out the way we want, but taking risks often ignites a flame in us to make dreams become possibilities!